Last Friday we received about a foot of heavy wet snow.  It was depressing and everyone was complaining and crabby, including me.  It felt like spring would never arrive.  April has been a strange and very snowy month. 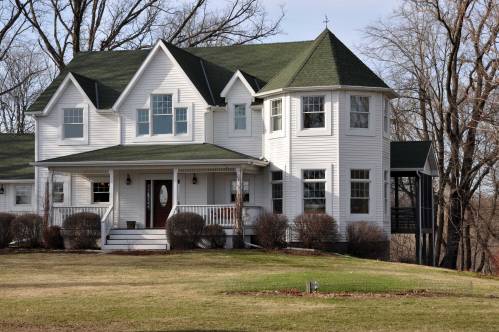 Yes, I think spring has finally arrived.  The last two days we have enjoyed temperatures in the low 70’s.  It is not expected to last all week, but it sure has helped to melt the snow and get spring kicked into gear.

Last weekend, when it was still cold, we hosted a smoking party at our house.  Jesse was going to fire up the smokehouse while the temperatures were still cool with the snow on the ground, so he invited friends to bring over anything they wanted to smoke.  We had a real assortment of good stuff:  almonds, peanuts, cheese, cheese curds, leg of lamb, pork chops, pork roasts, ribs, and chickens.  Once the smokehouse was loaded up, we enjoyed chatting and having some beverages while we waited for the smokehouse to work its cold-smoking magic.

We also started cooking sap to make maple syrup the same day.  The sap ran very late this year due to the crazy spring.  We were not sure if it would run at all, but the trees finally started dripping and actually produced a lot of sap.

Jesse found this stainless steel pan at a restaurant equipment store and it works great on our outdoor stove to cook the sap.  It has a lot of surface area to help with evaporation and to cook the sap down faster.  The sap looks just like water when you first collect it from the tree to start cooking. 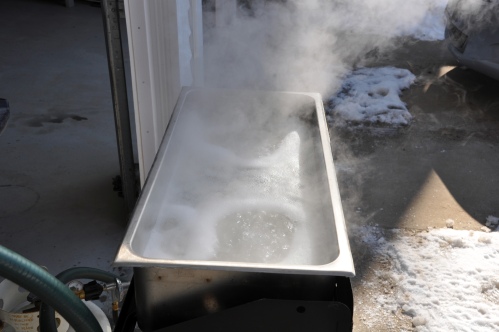 As it cooks longer, it starts to brown up and begins to have a sweet caramel-like aroma.  We cooked down enough sap last weekend to make one gallon of syrup.

This past Thursday evening Jesse fired up the stove once again and cooked down the rest of the sap overnight.  In total, we ended up with two gallons of syrup.  Yum! 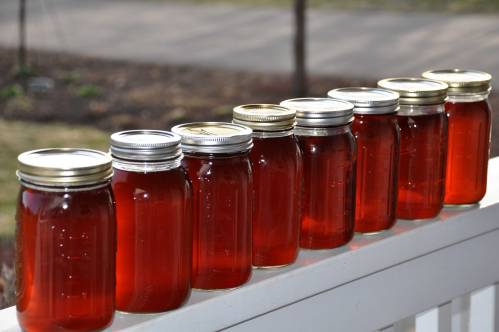 Yes, spring is here.  The birds have been singing, the geese are honking, and the frogs have awoken and are singing their lovely spring song.

All varieties of wildlife are on the move. During the day yesterday, I was working at home and as I glanced up from the file I was reading, I noticed these turkeys come walking past the back of the barn and headed towards the river. I grabbed my camera and snapped a few shots.

We joke sometimes about living in a nature preserve.  I guess we have the river to thank for the wide array of wildlife we get to see and/or hear (the owls hooting at night are my favorite) on a daily basis. 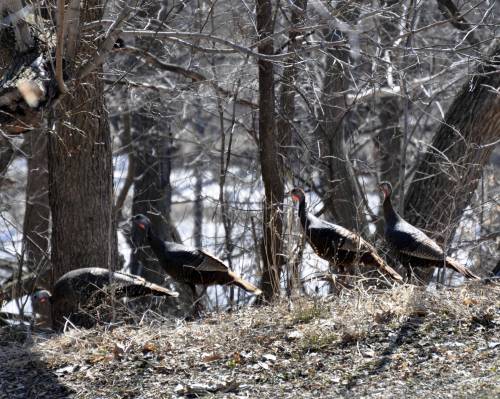 Along with the melting snow comes spring flooding.  The water has risen rapidly in the last two days and the river is overflowing. 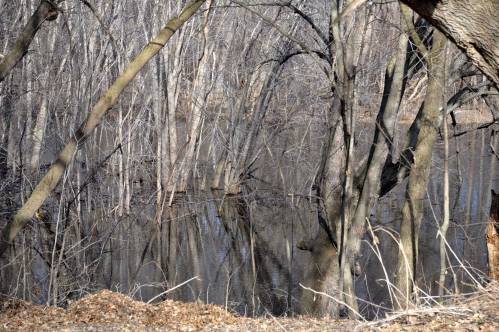 We spent yesterday evening and today outside enjoying the warm temperatures by starting our spring cleanup.  I cut down any perennials that stood through the winter and raked all the leaves out of the gardens.

Tired of the chickens coming up by the house and digging in the dirt of my perennial garden, we decided to lock them in the vegetable garden fence today to enjoy the sunshine.  Ironically, we built this very fence in part, to keep the chickens out of the vegetable garden.  They loved kicking around the bit of straw, pecking at the grass, and digging in the dirt all day. 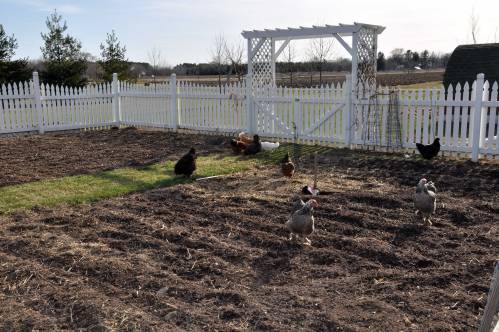 Underneath the piles of leaves I discovered some flowers eager to get growing.  These tulips had obviously decided that spring was here, despite the foot of snow we received just a week ago.

Likewise, the peonies are bursting out of the ground.  I love peonies so much.  They remind me of my grandma.

Our old girl was out soaking up the sunshine today too. I love her an awful lot too.

The beehives are sitting empty across the field awaiting their new residents.  We ordered two nucs of bees that should arrive in about 10 days.  The nucs contain some frames of brood and a queen, so they are already somewhat established.  Since we are starting over again after a year of bee-keeping drama (swarming, robbing, etc.), it will be nice to have the hives get up and running quickly.

So, after a very long winter, it seems as though spring has arrived.  Finally.

There may likely be a few more bumps along the way, but we are definitely headed in the right direction.

Our maple syrup adventure is finally winding down.  The sap reluctantly started to run last weekend after the night-time temperatures started dipping below freezing.  By all accounts, this year has not been a great sap run because of the warm temperatures.  We decided to tap more trees along the river once the flood waters receded to increase our quantity of sap.  It was time to start collecting sap last weekend and everyone wanted to get involved.

We have a large water tank that we put on our ATV in the summer to water trees.  The tank functioned well as a collection and holding tank for the sap.  Below the boys are emptying sap into the tank.

END_OF_DOCUMENT_TOKEN_TO_BE_REPLACED

The river bottom behind our house is filled with large maple trees.  As if we aren’t already busy enough trying to keep up with all of our kids’ activities and our other projects around the farm, we decided to try to make our own maple syrup after – you guessed it – seeing this great article entitled “Sugar From Trees” in the March/April 2009 issue of Minnesota Conservation Volunteer.  Our beekeeper friend also produces and sells maple syrup on a larger scale and Jesse went to observe his operation last spring.

Last fall, while the trees still had leaves, we identified sugar maple trees and marked them with orange tape.

As the weather started to warm up during the days this week into the low to mid 40’s (“warm” is a relative term when you live in Minnesota), we knew it was time to get the trees tapped.  The best syrup is made from maple sap after it first starts to run in the spring.  Tree sap starts to flow when temperatures rise above freezing during the day but fall back below freezing at night.

To tap the trees, Jesse and our oldest drilled holes into the tree trunks and inserted spiles. Sap drips out of the tree during the warm days and into the spile.  We purchased plastic spiles on-line from Leader Evaporator, but there are also metal ones.  I’m not sure why we got plastic, other than it was more cost-effective.

We also purchased some tubing to attach to the spiles to direct the sap into buckets sitting next to the trees.

The length of the sap run can vary, sometimes ending after only a few weeks.  Even though the tree sap flows through fall, once the weather warms up and stays above freezing at night, any syrup made from the sap won’t taste good any more.

We tapped a total of five trees, each with two spiles running into a five gallon bucket.  The temperature had already dropped below freezing when they were tapped tonight, so it was not evident whether the sap is running yet.  We have a large plastic drum to collect the sap in so that we can refill the buckets.  It takes around 40 gallons of sap to make a gallon of syrup!

There are a lot of steps that need to successfully be completed between collecting the sap and having maple syrup.  We need to collect the sap, keep it cool, cook it down the right amount, and boil it to the proper temperature.  I have no idea how this adventure will play out, but it always fun to try something new…even if we don’t really have the time.