We left town last Friday morning for a long weekend out at West Point to visit our two cadets and to attend the Homecoming football game. As we were heading out the door on our way to the airport, the sun was coming up and it was just one of those sunrises…the pink, orange and yellow kind.

Jesse encouraged me to snap a few pictures with my iPhone.  The barn against the sky was just too pretty to go undocumented. I did a quick edit in Instagram to lighten it up. 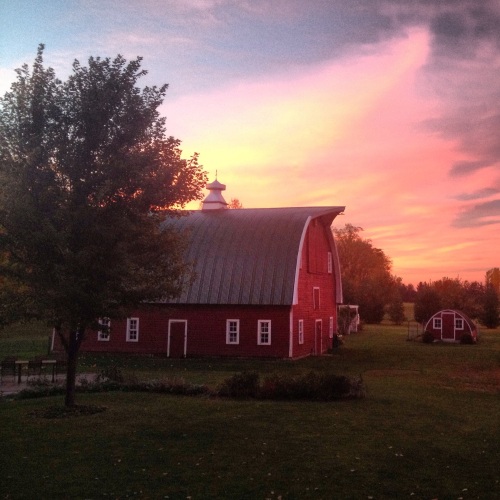 The weekend went by in a flash and we are back at home again on the farm.  Our cadets are coming home this upcoming weekend for a visit over a long weekend for them.  It will be nice to have everyone at home, even if it is only briefly.

Where we love is home – home that our feet may leave, but not our hearts.

On my way back from a walk last week, I noticed some amazing clouds in the sky.  Never without a camera thanks to my iPhone, I took a picture.

Harvest time is upon us and in the distance to the left you can see the remaining stand of corn in our neighbor’s field.  In the forefront is the soybean crop he has planted in our field. 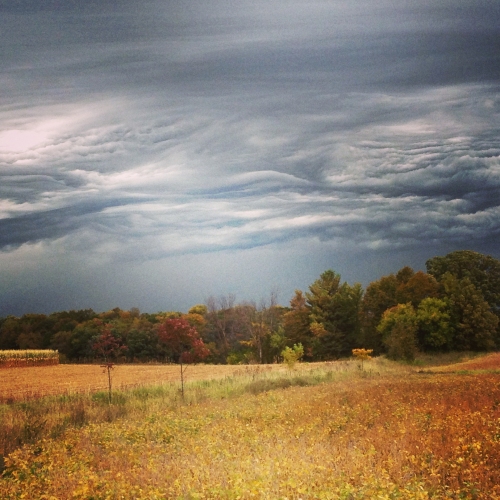 I took this photo on my iPhone 4s and did a quick edit in Instagram. Technology today makes  photography so easy and accessible.  I absolutely love it!

On a beautiful Sunday afternoon a few weeks ago, Jesse and I decided to take our two-person kayak down the river.  It had been a week of tragedy in our small Minnesota town.  Earlier in the week, a swim teammate of our daughter was killed in an automobile accident.  She was only 18 and had just graduated with our daughter in June.  We went to the funeral on that Saturday to offer our support and represent our daughter, who is at school out east and could not be there.  It was heartbreaking.

And then on Sunday morning we learned of another community member, a business person and father in his 40’s, that had passed away unexpectedly in his sleep. More tragedy.  Although we did not know him well, an untimely death of someone in a small community is always a shock.

Having a quiet and relaxing day seemed appropriate…so we decided to head to water.

We put the kayak in the river in the backwater behind the house and made our way on to the main part of the river.  Fall is a great time to kayak here because the mosquitos have mostly died off and the air is crisp and fresh.

I took my iPhone 4s along and was snapping pictures along the way. 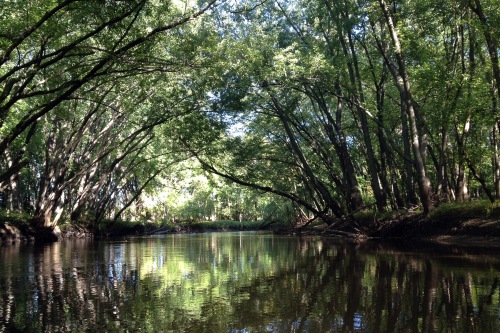 I still cannot believe that it took us a decade of living on the river to finally get around to buying ourselves some kayaks. Why did we wait so long?

I took a bunch of “selfies”, but this is the only arguably decent one of the bunch.  The angles are not real flattering for us older folks.  I guess selfies are best left to the younger generation.  🙂 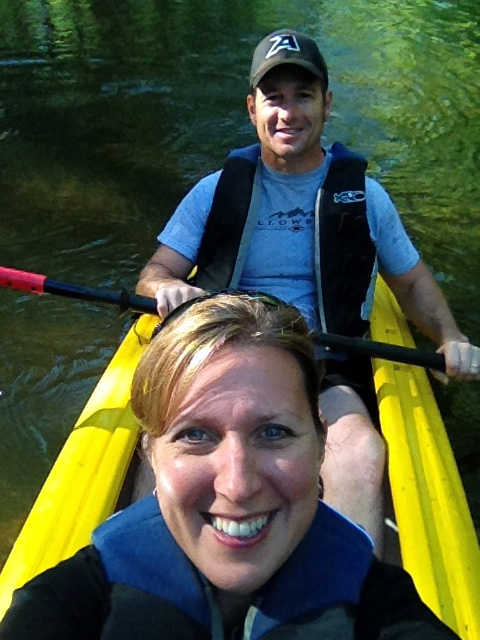 Going down stream is very relaxing and for the most part, requires little effort.

Most of the foliage was still green, but some Sumac along the shore was starting to show some fall color. 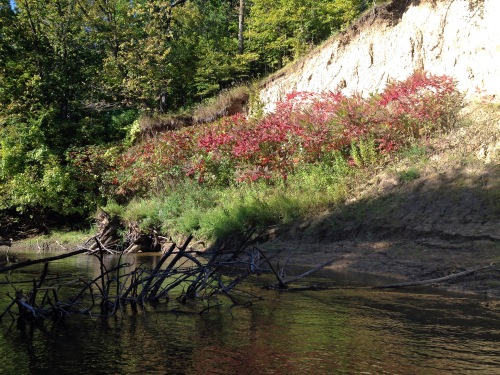 The Rum River is a fairly messy river, with trees down and random stumps protruding here and there.  The DNR or someone else must cut a path through the debris occasionally to keep the waterway open to kayaks and canoes. We are grateful for the efforts, whoever it is. 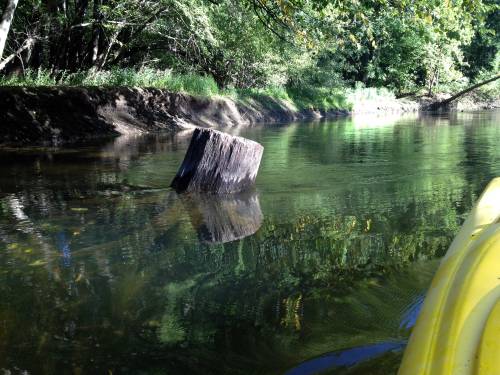 Because of the frequent changes in the water level due to spring and summer flooding, there is a lot of erosion.  Trees along the bank gradually have the dirt around their roots washed away and some tip into the water, creating the clutter. 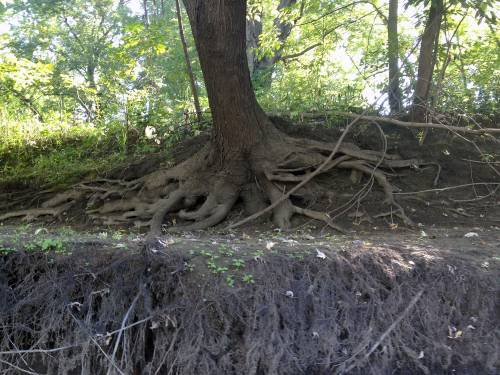 The sun sparkled on the water in open areas. 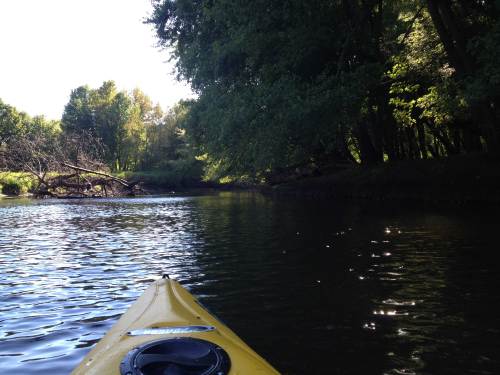 It is so peaceful. 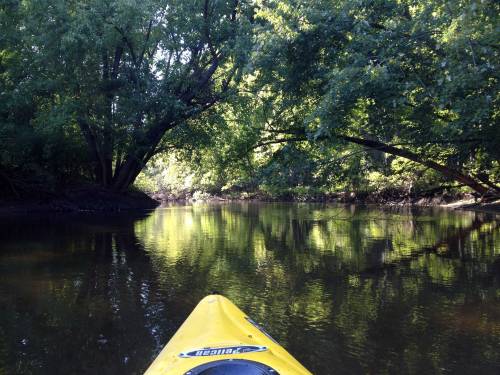 A few random maple trees were showing off their colors already. 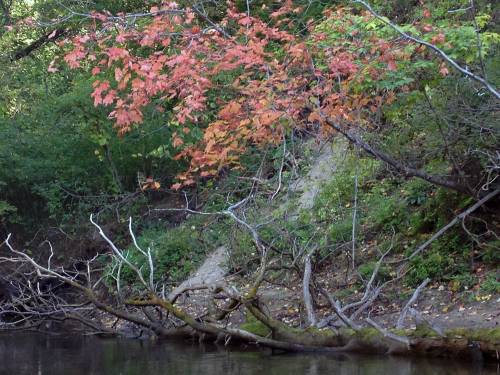 The river is very shallow in some areas, but we almost always are able to skim across the surface in the kayaks.

You can see more fallen trees along the bank. The erosion and fallen trees are not alarming.  I would imagine this process of transformation has happened for decades on the Rum River. 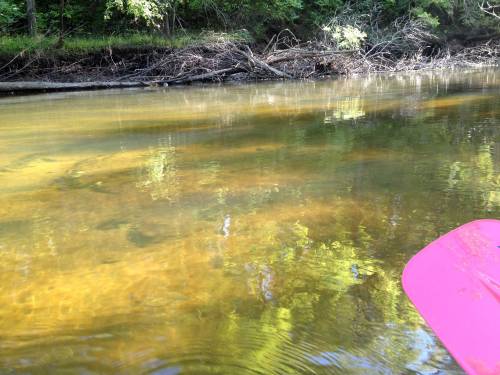 I was so busy taking pictures around every turn that I did not paddle much.

It made the ride even more lovely for me.  🙂 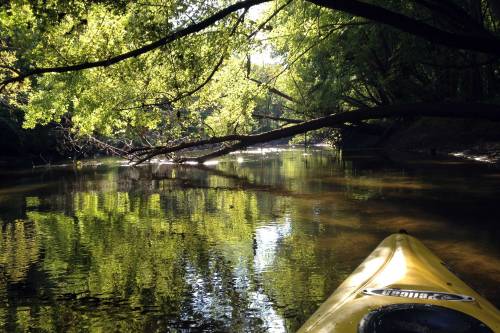 More signs of erosion where the sandy river banks are washing away. 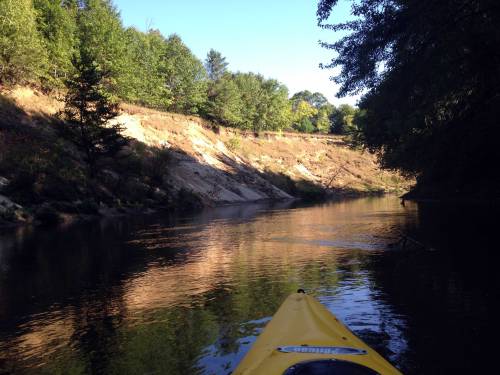 After about an hour, we coasted into Riverside Park, where we had dropped off the trailer ahead of time. 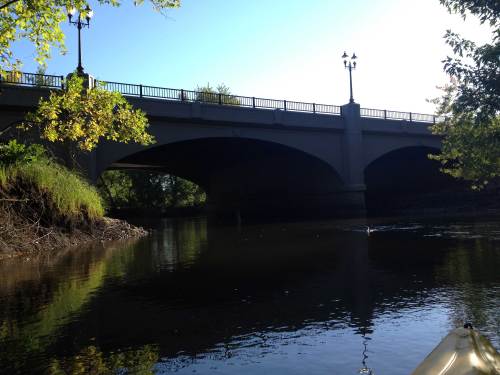 What a perfect way to spend a Sunday afternoon. 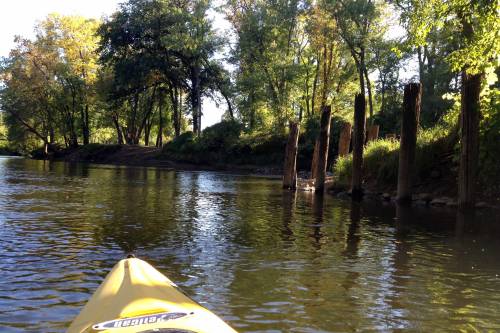 We are so grateful to be alive and living this blessed life.