As I mentioned in an earlier post this winter, we had a roller-coaster of a summer last year with our bees.

After being so thrilled that we had successfully wintered our bees for the first time since starting beekeeping, we were devastated to discover that they had swarmed in May because we waited too long to divide the hives and they became too crowded.  The early spring last year and the warm temperatures moved everything ahead and because of our inexperience, we missed the signs that they were preparing to swarm.

All was not lost however, because when bees swarm they leave behind a portion of the worker bees along with new queen cells, one of which eventually becomes the new queen.  We observed the hives over the next few months and it appeared that things were back on track, they had a new queen, and were rebuilding their population.  Of course, the hives were not nearly as strong as they would have been had they not swarmed, but we knew we would still get a honey harvest.

The honey started flowing and the bees had built up a good amount of supers of honey.  Once again, our optimism for our honey harvest was shattered in October when Jesse went out to the hives to check on them and discovered they had been robbed!  Yes, hives can be robbed by feral bees.  All the frames that the bees had worked so hard to fill all summer long were stripped completely clean, as if they had never had a bit of honey in them.  The other unfortunate effect from robbing, is that the honeybees usually die in the process of defending their hive against the invaders.

Needless to say, we lost both hives of bees and only ended up with a very small amount of honey to harvest…another year of learning about all the things that can go wrong beekeeping.  We have just put in our order for two nucs of bees this spring.  We are not giving up; we’re just starting over again.

So, spring finally arrived and so did our two nucs of bees.  The bees arrived to our supplier on a rainy and dreary Friday afternoon.  Jesse and our daughter went to work getting the hives ready to add the nucs, which are about 5-6 frames of bees with a queen and brood.

After adding a few frames to each hive of honey from last year’s bees, it was time to get suited up and put the frames in the hive.

The bees were very riled up and it was a little scary, so I did not stay too long to photograph. I don’t think they enjoyed the ride across the plowed field in the back of the 4-wheeler, even if it was a slow one. 🙂

Our daughter braved the angry bees for the installation of one nuc and only received one sting on her leg.  She decided to let her dad install the other hive.

We have not examined the hive to look for brood, but after about 10 days it was clear that the bees were multiplying and Jesse decided to add another brood box. Hopefully the weather will cooperate and he can take a peek inside soon to see how things are going. 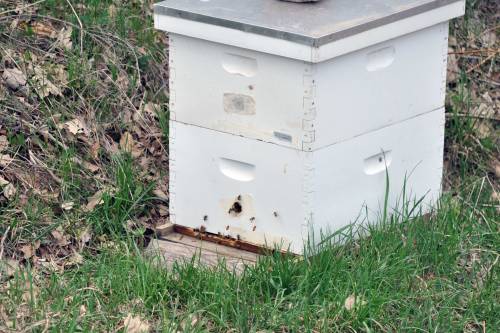 In the meantime, I can tentatively say that things appear to be going well so far this season with the bees.  I know all too well however, that any number of bee disasters might be ahead yet this summer.  We are continuously learning and expanding our knowledge of beekeeping, so I am hopeful that it will be an uneventful beekeeping season.

For any beekeepers out there, how is your season starting out?