Where has the summer gone?! Here it is, late October, and I have failed to give any updates on what has gone on around the farm this summer.  Taking the time to document our projects through blog posts is important to me because in addition to keeping my blog current, we often turn to these posts at some later time to help refresh our memory on the timing of a project, the outcome, the method or tools we used, etc.  As much as we think we will remember things, we simply do not.  At least not the details.  This post is my first effort at “catching up” for 2014.

After about a decade planted in alfalfa, the field around our house had become mostly grass and weeds, so last year we had our neighbor work it up for a new crop. Due to the irregular shape of the field, he decided it would be easiest to plant and harvest a soybean crop.  The wet spring delayed his planting and the ensuing lack of any significant precipitation in the remaining summer months made for a pathetic yield.  Besides the poor harvest, the field looked like thunder most of the summer with spindly looking soybean plants and abundant weeds.  We decided it was best to return the field to hay this year for both aesthetics and utility.

Like last year, this past spring was soggy and we were unable to get into the field early in the season.  After consulting various sources, we determined it was best to plant the hay later in the summer anyhow.  In August, Jesse finally borrowed the neighbor’s tractor and disk harrow and spent an afternoon working the field to knock down the weeds and break up the sod that had developed in the low spots.  I can assure you that although this may look like “work” to many, getting out from behind the desk at his day job and behind the tractor wheel was pure pleasure for this farm boy. 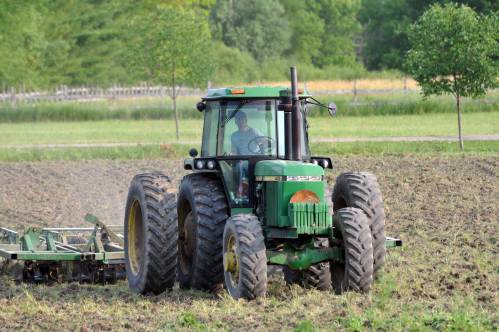 The weeds and grass browned up after a few days and then it was time to try and smooth out the field.  Jesse used our small tractor and an old abandoned disk the neighbor had sitting in his woods.  It was small, but it fit on the tractor perfectly and got the job done. 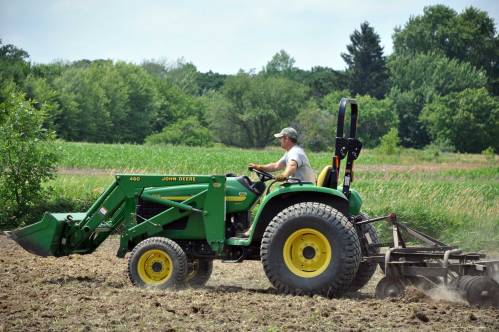 We decided to use a hay and pasture mix that contained alfalfa, clover and timothy grass.

Jesse used a brillion seeder to plant the crop. 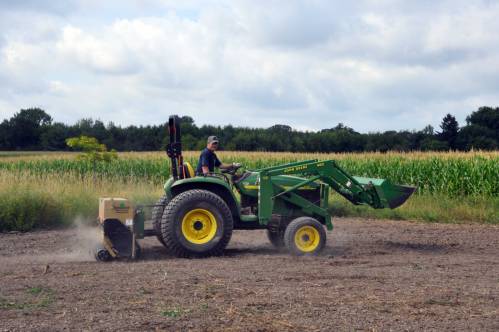 We lucked out with the weather and enjoyed some nice shots of rain after the field was seeded, which helped it sprout quite nicely.

The overlapping seeded rows are visible in this picture.

This photo from yesterday shows how robust the plants are looking now.

We are keeping our fingers crossed that the new planting fares well through winter and comes back strong in the spring.  If all goes well, our bees will be have a great summer surrounded by a lovely crop of flowering alfalfa and clover.